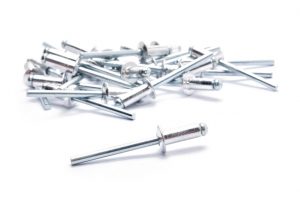 The term “rivet” is used by a pop rivet supplier to describe a variety of fasteners with a couple of common traits. They are pre-shaped at one end and have their other end reshaped when they are in to use. All have a smooth shaft that passes through the materials being bonded. They are used to join two or more materials together and form a joint that is stronger and tighter than a screw of the same diameter could be. Let’s look at four of the most popular rivets a pop rivet supplier might have in addition to pop rivets and what applications they’re used for:

As a pop rivet supplier in Waltham, Massachusetts, we should start with the blind rivet – also known as the pop rivet:

Blind rivets from a pop rivet supplier are a tubular rivet. Available in a flat head, countersunk head, or modified flush head, blind rivets feature a mandrel that is drawn into the rivet, expanding the blind end and then snapping off to finish securing the connection. Blind rivets are ideal for applications in which the joint can be accessed from only one side.

The original rivet design, going back to the Bronze Age. Solid rivets can be deformed simply with a hammer, a crimping tool, or a rivet gun, depending on size and material softness. One of the most reliable, safe, and foolproof rivets around.

Semi-tubular, or tubular, rivets feature an indentation or hole in the end opposite the factory head, making it easier to deform, using less force. Semi-tubular rivets are popular for mass production applications.

So even if you’ve known us as a Waltham, Massachusetts pop rivet supplier, you should know that we also carry these and many other rivet styles in a variety of metals for use in a wide range of commercial and industrial applications and products.

If you’re looking for a pop rivet supplier in Waltham, Massachusetts, contact the pop rivet supplier experts here at Electronic Fasteners. They might be able steer you to another rivet that is more appropriate for your specific use and that can save you time and money.