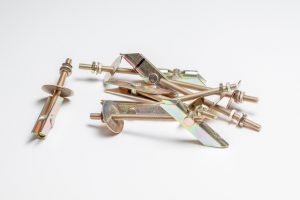 Toggle bolts are one of the many unique styles of bolts designed for use in specific applications. If you’re in need of toggle bolts for Waltham, Massachusetts, Electronic Fasteners carries a comprehensive inventory of toggle bolts in all sizes and materials, including stainless steel, galvanized, steel-plated and more.

Toggle bolts for Waltham, Massachusetts are especially popular for a wide range of construction applications – everything from hanging shelving and cabinetry on wallboard to supporting commercial and industrial fixtures on hollow masonry materials such as cinder blocks.

Also known as butterfly anchors, toggle bolts feature folding metal “wings” that are held closed to be inserted into a drilled hole. Upon being pushed through the wall material, the spring-loaded wings pop open, prohibiting the Waltham, Massachusetts toggle bolt from being pulled back through the hole. Backward pressure is applied to the bolt to hold the wings against the wall, enabling the bolt to be tightened without the wings spinning. Once the toggle bolt is tightened, it spreads the load weight against the wall, providing the ability to hold even fairly heavy objects securely without being anchored into a stud or other structural member.

The functional design of toggle bolts does not allow them to be removed and reused. Once installed, the bolt itself may be removed, but the toggle will remain behind the wall. When no longer needed, toggle bolts can also simply be pushed through the wall and the hole patched.

If you have a consumer, commercial, or industrial application that calls for toggle bolts for Waltham, Massachusetts, contact the toggle bolt experts here at Electronic Fasteners. We can help you find the right toggle bolts for your needs and budget.