Hardening and Tempering in the Fastener Industry

Anyone who has dealt with various metals and alloys in tools, blades, fasteners, and other metal products has probably run across the terms hardening and tempering. But what exactly do these terms mean and how do they affect metal?

To begin with, both of these terms are related to heat treatment – the process of heating and cooling metals to change their microstructure and enhance certain physical and mechanical properties to make a particular metal more useful or efficient for a particular function. The temperature to which a metal is heated and the speed with which it is cooled afterwards can significantly alter a metal’s properties, including strength, hardness, toughness, electrical and corrosion resistance, and ductility (the ability to stretch metal)

Hardening and tempering are two common forms of heat treatment in the fastener industry:

Hardening is a process used to create resistance in metal to plastic deformation – in other words, to keep it from getting deformed under impact. This characteristic is useful in fasteners that can be subjected to being hit or stressed in some way, preventing the fastener from doing its job or failing entirely.

It’s important to note that hardness is not the same things as toughness. Hardness, as we just pointed out, refers to permanent deformation. But toughness (really, just another term for strength) refers to how much total energy can be absorbed before a material – in this case, metal – breaks. More on these two attributes in a moment.

Tempering is a heat treatment process that is often used to improve hardness, strength, and toughness, as well as decrease brittleness in fully-hardened steel. The goal of tempering is to enhance the best combination of mechanical properties in a metal. In most materials, hardness and toughness come at the expense of each other – you must have less of one to have more of the other. Tempering is the critical process by which those two properties can be balanced with careful temperature and time control. Failure to temper fasteners correctly can lead to a myriad of performance problems such as premature failure or shorter than normal service life. 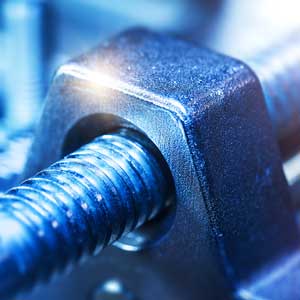 About 90 percent of fasteners are steel-based and the required strength level is usually developed in steel fasteners using the tempering process. Accordingly, the terms high strength as well as heat treated or hardened are often used interchangeably in the fastener world. However, heat treatment, in general, includes a wide range of processes. Some heat treatments such as annealing soften a metal, while others harden and strengthen. Annealing heat treatments are used to relieve residual stress, remove cold work and dissolve the alloying element or segregation and provide a more homogeneous material.

While hardening heat treatments increase fastener material strength, the hardened alloys have reduced ductility, which means they will break under smaller strains or deformation compared to annealed fasteners. Heat-treated bolts are stronger, but not indestructible. Misuse of fasteners could lead to their breakage and even failure of the entire assembly or piece of equipment. Over-tightening hardened bolts above their torsional strength can result in failure. Under-tightened fasteners can lead to premature failure due to fretting, fretting fatigue, or changes in loading and internal stresses on the fasteners. As with any threaded fastening system, the proper torque level must be applied to take full advantage of the bolt’s strength levels. If a soft, non-heat treated nut is used with a hardened bolt, then premature failure is likely to occur in the nut.

Utilizing heat-treated fasteners in a design can provide structural benefits, however, it’s important to know how your fasteners have been heat-treated and what properties have been increased – or decreased. If you’d like to know more about hardening and tempering for your fasteners and how they might affect your product or project, give us a call.