How can I remove a stuck rusty fastener? 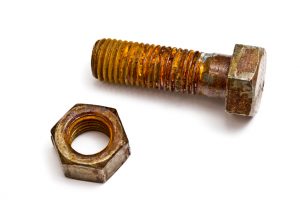 Rusty nuts and bolts are a constant challenge for virtually any commercial and industrial product, component, or system assembled using various types of steel (except stainless) and iron. If you’re faced with a rusted fastener  that won’t budge, resist the urge to force it — you run the risk of simply snapping off the bolt or making the problem worse in some other way.

Almost any type of rusted fastener situation can be remedied using one of the following methods:

Heat. Many rusty nuts and bolts can be freed by applying heat to expand the metal and break the rust bond. An oxy-acetylene torch will do the job faster and easier than a run-of-the-mill hardware store propane torch but if your facility doesn’t have one, a propane torch will certainly work. Be careful not to overheat it – it doesn’t need to be red-hot.

Once the bolt is hot enough to turn a little water to steam, let it cool, then try turning it with a wrench. If it’s still not loose, try heating and cooling several times, gently tapping the stuck bolt with a ball peen hammer to help loosen it. The cycle of heating and cooling, combined with the vibration of the tapping, should be enough to break the tension bond between the rust and the metal threads.

Cold.  Still not loose? Then try applying cold. An aerosol freeze spray will often do the trick, reducing the temperature of metal parts to between -60 to -72 degrees Fahrenheit. Similar to the physical action of expansion to break the rust bond when heating parts, freezing accomplishes the same thing in reverse by contracting the metal components. This time, let the parts warm up before attempting to wrench them. Again, several applications of the chilling/warming cycle might be needed to make it work.

Mechanical action. Still no go? It’s time to get tougher with a combination of drilling and extraction. Drill a hole down the center of the bolt shank to the bottom and insert a counter-threaded extractor bit. This creates a more solid hold and because the bit is counter-threaded, turning it to loosen the old bolt actually tightens the bit’s grip, making it more effective.

If the old bolt head is still sound, but rounded off a bit because of repeated attempts to wrench it free, you can bring it roughly back to shape by using a ball peen hammer and center punch to bang the edges out, creating new corners for a wrench to grab.

If you’re still experiencing trouble and won’t destroy or compromise the part by drilling a hole in it, you can drill an angled “rescue” shaft to reach the deepest section of the bolt and push some lubricating oil into the rescue hole to help penetrate and loosen the deepest rust.

Finally, if all else fails and you can sacrifice the bolt, use a hammer and the tip of a cold chisel to hammer away at the corner of a bolt head edge, using sharp blows to drive the bolt counterclockwise and free it.

The best way to handle a rusted fastener problem is, of course, to avoid it in the first place and prevent your fasteners from corroding by coating them with an anti-seize lubricant.