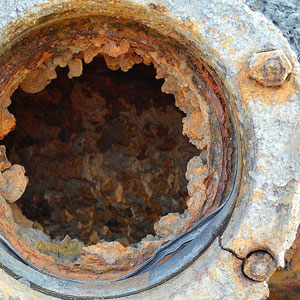 Localized corrosion is, of course, the opposite of general corrosion. It occurs when a specific metal area comes in contact with corrosion-causing agents or stresses. Local corrosion comes in three basic types:

Pitting: This occurs when an area becomes charged, producing a localized galvanic reaction. The result is small holes or cavities that can be hard to detect because they can be hidden by rust.

Crevice: Crevice corrosion is often the result of a stagnant micro-environment. Acidic build-up or lack of oxygen in these sealed-off areas, such as under gaskets, can produce destructive crevices.

Filiform: Water trapped under painted or plated surfaces can cause corrosion that starts at small defects and can spread under the coated surface, eventually leading to structural deterioration and weakness.

Galvanic corrosion, also descriptively called dissimilar metal corrosion, occurs when two different metals with different electrochemical charges come in contact in a corrosive electrolyte, causing one metal to deteriorate faster than the other.

Caustic agent corrosion can occur when impure gases, liquids, or solids are dissolved in water to form corrosive agents such as hydrogen sulfide.

Stress corrosion occurs when metal is subjected to cold work, heat treatment, or welding. Cracks can form along the grain boundary, inviting further corrosion that can eventually lead to failure.