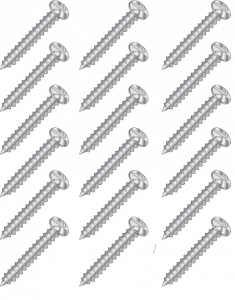 Virtually every industry has some kind of product or assembly that requires fasteners that are difficult to remove. There is a wide range of sizes and materials, but only two basic types: tamper-proof and tamper resistant. While they sound the same, they are slightly different fasteners:

Tamper-resistant fasteners are relatively difficult to remove because they require a unique driver that is not commonly found in your average hardware store. However, they are not custom drivers and they can be obtained with a little effort. Tamper-resistant screws are ideal for situations in which an assembly is often a target of a spur-of-the-moment opportunity that is quickly diffused when the potential vandal realizes it won’t be easy to access or remove the targeted item.

Tamper-proof screws require a unique tool that, in mission-critical situations, can be custom-made to present a nearly-impossible challenge for removal. Without that specific driver, the fastener simply cannot be removed without destroying it and rendering the assembly or product permanently inaccessible without destroying it as well.

Tamper-proof screws are often used in industries and applications in which access to an assembly needs to be denied to anyone other than authorized personnel. These include:

Pin TX screws: Like the Pin Hex, the Pin TX has a pin inserted in the recess of a 5- or 6-lobe drive. These screws also require a special tool to fix and remove them.

Sentinel screws: These are permanent fasteners that can only be turned in one direction, making them impossible to remove. They’re easy to install using a cross head or pozi driver and so are suitable for large volume applications.

Clutch head security screws: Similar to Sentinel screws, these can be installed with a standard slotted screwdriver, but also cannot be unscrewed, making it a permanent fastening.

2 Hole or Pig Nose screws: These screws have 2 holes drilled into the head, making it look like a pig’s nose. This type also needs a special bit for fixing.

To learn more about tamper-proof screws that are appropriate for your specific application, give us a call or drop us an email here at Electronic Fasteners.