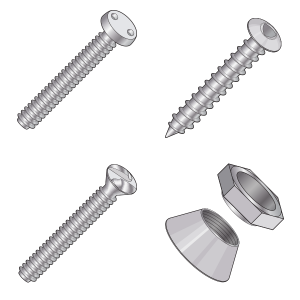 Tamper proof screws are used in assemblies, applications, and industries as a means to deter or prevent vandalism or disassembly where an assembly is publicly accessible. Tamper proof screws are distinguished by an unconventional drive, making tampering with the screw highly difficult, if not impossible without the matching driver.

Available in a wide range of forms, materials, and styles, tamper resistant and tamper proof screws are intended to provide different advantages in the applications and products where they are installed.

Tamper proof screws are used in a broad range of industries and applications, including:

There’s a common misconception that tamper resistant screws and tamper proof screws are the same thing, however, that is not the case. Tamper resistant fasteners are relatively difficult to remove because they require a relatively uncommon driver to fit the head. Tamper-proof screws are nearly impossible to remove because they require a unique, often custom, tool.

“Resistant” implies that the fastener is relatively difficult to remove with tools that might be found in the average tool chest, thwarting any casual, opportunistic attacks but offering little protection in cases where someone deliberately intends to remove that particular fastener. “Tamper proof” increases security exponentially because the unique driver is virtually impossible to acquire without having purchased that particular style of fastener and the requisite tool needed to install it.

To learn more about utilizing tamper proof screws for your assemblies or applications, contact the tamper resistant and tamper proof fastener specialists here at Electronic Fasteners.

We’re pleased to offer you the services of our Customer Support staff. The Team has many decades of fastener industry experience with in-depth skills ranging from metric fasteners, to mil spec fasteners, to custom, made-to-print products, and so on.