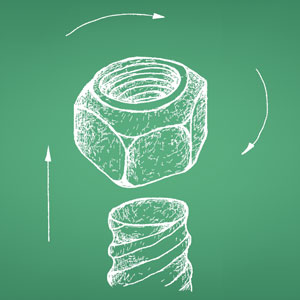 It may be hard to believe, but screws are actually one of the world’s simplest machines, using its threads to move a cylinder forward and backward. Of course, screws are also one of the most effective fasteners as well, utilizing both internal and external threads to create friction that holds it in place. As you might imagine, the style of thread plays a major role in choosing the right screw for a particular application.

Thread classes
Threads are initially identified as either internal (as inside a nut) or external (the outside of a screw), also known as male and female. External threads or bolts are designated with the suffix “A”; internal or nut threads with “B”. Threads are distinguished by the amounts of tolerance and allowance specified; for general guidance, the higher class number the tighter the fit.

1A & 1B: For rough commercial quality work where loose fit for spin-on-assembly is desirable

2A & 2B: The recognized normal production standard for the majority of commercial bolts, nuts and screws

3A & 3B: Provides a close fit between mating parts for high quality work

Class 4: An obsolete thread class that was more theoretical than practical

Class 5: Used principally for studs and their mating tapped holes; a force fit requiring the use of a wrench and application of high torque for semi-permanent assembly

Full diameter shank: The major diameter, measured to the outside of the thread and produced by cut thread or by roll thread on an extruded blank

Lead: The distance a screw thread advances in one turn along the screw’s axis

Major diameter: The largest diameter of a screw, measured from the edge of the thread

Minor diameter: The smallest diameter of a screw, measured from the base of the thread

Pitch: The distance from one point on a screw thread to a corresponding point on the next thread, measured parallel to the axis

Pitch diameter: The simple, effective diameter of screw thread, approximately half way between the major and minor diameters

Rolled thread: Threads that are cold-formed by squeezing the screw blank between reciprocating serrated; this acts to increase the major diameter of the thread over the diameter of unthreaded shank (if any), unless an extruded blank is used

Undersized shank: Approximately equal to the pitch diameter of the thread and produced by roll-threading a non-extruded blank