Where Do Fasteners Come From?

Virtually every home and business workshop contains some version of a cigar box or old mayonnaise jar filled with loose screws, nuts, and bolts. Need a fastener for a project or a product? Just shake that container out on the workbench, rummage around, find the right fastener in the right size and you’re good to go. 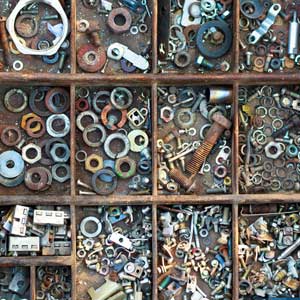 But what did all these fasteners really come from? How did it all start?

Believe it or not, but the screw thread is an ancient design. It’s been attributed to a Greek philosopher named Archytas who, it’s claimed, thought it up almost 2400 years ago, earning him the nickname “the father of mechanics.” Threaded devices went on to enable an astonishing range of machines and products to work – from olive oil and grape juice extractors to water screws and farm irrigation systems.

In 1568, Jacques Besson, a French inventor, created the bolt and screw manufacturing machine. He also made a screw-cutting plate for use with lathes, which was later perfected and put into wider circulation by the English company, Hindley of York. In the eighteenth century, screw evolution continued when Antoine Thiout, a French clockmaker, attached a screw drive to a lathe, enabling tool carriages to move semi-automatically. By mid-century, England’s Wyatt Brothers factory was cranking out more than 150,000 wooden screws per week.

While historians can’t quite agree on when nuts and bolts were invented, we do know they were a major component of the Industrial Revolution in the 19th century and have rapidly evolved over the past 150 years. The U.S. Standard Thread was developed in the early 1870s, followed by the Society of Automotive Engineers (SAE) standard, to name just two major developments. By the late 1960s, self-drilling screws, marketed as “pinched point” or “cold forged” self-drills that cut down labor time and costs, were gaining a foothold in the metal building industry.

Standardization was key to the rapid development of fasteners. American inventors such as David Wilkinson created reliable fabrication machinery that provided highly accurate, uniform, and repeatable results to help promote the standardization of specifications. By the mid-1800’s Connecticut companies were in the forefront of the threaded fastener industry, mass-manufacturing screws, nut, and bolts in volume, marketed and sold with standard price lists.

By the mid-20th century, US fastener manufacturers employed over 50,000 workers and were producing upwards of 2 billion fasteners per year. However, foreign firms, realizing there was money to be made in fasteners, jumped into the game with cheaply-made, sub-standard products that undercut higher-quality American-made ones. As a result, the domestic industry slumped until the end of the 80s. But in 1990, Congress passed the Fastener Quality Act which changed the game significantly and enabled American companies to win back market share.

Although competition from foreign manufacturers is still an issue in the 21st century, the US maintains its leadership by responding to the need for technologically-sophisticated products. The aerospace, medical and food industries, as well as energy producers and the semiconductor industry all require special materials such as A286, Inconel 718, PVDF, or MP35N, as well as uncompromising quality, strength, and reliability.

Fast forward to the last twenty years, and fastener design developments have moved even more rapidly, thanks to the introduction of nickel-based alloys. Unlike steel, nickel-based alloys can retain their form in high-temperature environments like those in engines and turbochargers. Engineers seek to continue fastener development by studying what’s possible with lightweight metal bolts made from materials like magnesium, titanium, and aluminum.

Fasteners will continue to evolve as the technologies that use them evolve. The last page of fastener history is nowhere near being written. It will be exciting to see what the next few years bring in the way of fastener development and evolution.