Why can’t you use a bolt again after it’s been torqued? 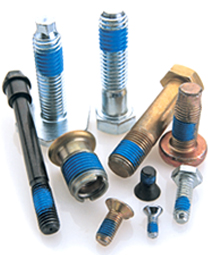 Many of the bolts used in machine assembly, such as the automotive industry, used what are called “torque-to-yield” (TTY) bolts. These bolts feature bolt heads that are specifically designed to stretch when assembled to provide strong, reliable clamping – especially valuable in critical assemblies where bolts that loosen can cause big problems.

Because of the unique properties of TTY bolts, the TTY bolt-tightening procedure is carefully designed to provide a better, more uniform seal that will hold under all conditions. Sophisticated torqueing equipment is utilized to tighten bolts just beyond their yield point.

So what specifically is “yield”? It can be defined as the maximum tensile force that can be applied to a bolt that will produce a specified amount of permanent deformation (most commonly 0.2 percent) within a specific fastener. While deformation may not sound like a good idea, the slight stretching of the bolt evens out the loading so that each bolt in an assembly, properly installed and torqued, will provide almost exactly the same amount of clamping force for overall greater strength and uniformity.

However, because the tightening procedure does permanently stretch the bolt, there is some risk of breakage if the bolt is reused. And since there is no way to tell how many times a bolt has been reused, it doesn’t make any sense to reused TTY bolts – the risk far outweighs the replacement cost of used bolts.

Having said that, we should note that mechanically, bolts may be reused provided the bolt NEVER exceeded its yield point (which is possible when TTY bolts are not specifically called for in an application). Once again, though, the risk outweighs the cost because there’s simply no way of knowing whether a bolt has been over-tensioned and deformed enough to compromise its performance with additional use.

To learn more about bolt use and reuse, proper installation, and which bolt or bolts are best-suited for your application, contact the bolt experts at Electronic Fasteners.